How to find us

Our shooting venues Are:

Practical shooting, sometimes called dynamic shooting or action shooting, is a shooting discipline where the competitors are trying to unite the three principles of Precision, Power and Speed, by aiming to score as many points as possible during the shortest amount of time.

By calculating Points scored against Time gives a Hit Factor.

AIPSC is the airsoft variation of the IPSC ( International Practical Shooting Confederation ).

While scoring systems vary between organisations, each measures the points scored, the time it takes to complete the stage or course, with penalties for inaccurate shooting or procedural errors.

The courses are called “stages”, and are shot individually by the shooters.  A typical match will contain several different stages. 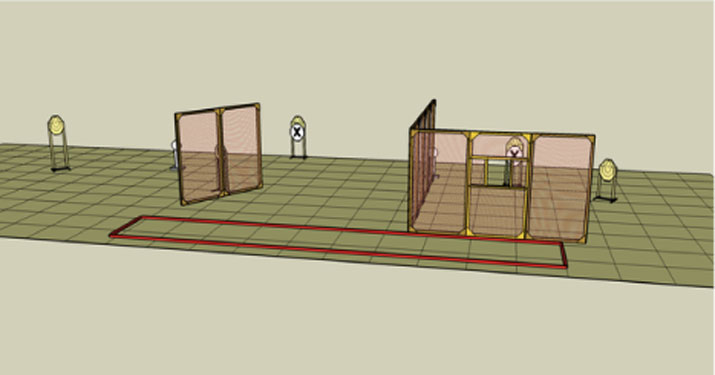 Action Air stages are designed on 3 different levels.  At each level construction must not require more than 9 scoring hits from any single location.

Must not require more than 12projectiles to complete.

Must not require more than 24projectiles to complete.

Must not require more than 32projectiles to complete.

Usually the shooter must move and shoot from several positions, fire under or over obstacles and in other unfamiliar positions. In addition some stages require the shooter to use Weak Hand only, or alternate between Strong and Weak Hand.  Some of the longer stages require reloads, and some other stages have compulsory reloads built in.
These have to be worked into the stage causing minimal delay.

There are no standard exercises or set arrangement of the targets, and the courses are often designed so that the shooter must be inventive, and therefore the solutions will vary between shooters.  Shooters will move positions in the shooting order so that everyone gets a chance to go first, or further down the order where they can watch other shooters manage the course of fire.

​Practical Shooting is currently the second most popular international target shooting discipline, being exceeded in terms of global participation only by the events administered by the Union International de Tir (U.I.T.) which dates from the latter part of the nineteenth century. However the International Practical Shooting Confederation has gone a long way towards closing the gap and today numbers some 85 affiliated nations including most European countries.

The appeal of the sport lies in the diversity of the courses of fire available to the shooter. Targets vary in size, shape, position and distance.

In the UK we have had to adapt our Practical Shooting following the various restrictions on firearms over the years.