On Sunday 12th May we had 8 members and 2 guests shoot 6 very challenging and fun stages, requiring some interesting tactical thinking, good accuracy and cross range shooting – which caused some major misses from most people.  Its amazing how we get accustomed to shooting in s straight line, so when a target is presented at an acute angle it became a whole new challenge.

After the 6 stages we had a 3 gun stage – with Gas Operated M870 Shotgun, a battery powered M4 (choice of 2 – heavy and light), and their own handguns.  The stage started with the shotgun, and having to take 6 poppers in 2 locations.  Having secured the shotgun the shooter ran forward to collect the M4, to take 5 poppers set on the stage, and 4 poppers at various heights.  The rifle had to be secured, pistol collected and magazines – on the opposite side of the hall, before returning to a central shooting position to take 10 paper targets with 2 rounds on each, and finishing with a central yellow popper.  A good run our, and everyone seemed to enjoy the challenge.  More practice needed racking the shotgun, and the M4 has battle sights, which proved a little bit of a challenge for some, but some good scoring nevertheless.  Its always a challenge having guns neutrally zeroed, especially when we have a range of people using them – different heights and reaches, left and right handed.

Some good fun which we hope to repeat at a future shoot.

Busy layouts – can be seen below 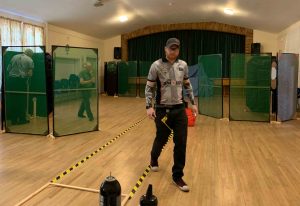 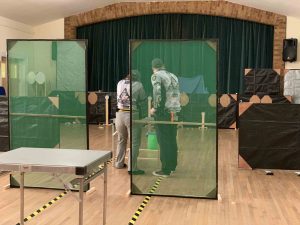